The world’s biggest and deepest pool for testing the latest underwater technology, helping advance subsea robotics and even training astronauts is being planned in Cornwall.

Blue Abyss, a £150 million facility which has the support of British astronaut Major Tim Peake, will be the world’s leading extreme environment research, test and training centre serving the offshore energy, marine, defence and space sectors.

It is planned for the Aerohub Enterprise Zone at Cornwall Airport Newquay, and is expected to create 160 jobs, pump £50m of build costs into Cornwall during its 18-month construction and generate £8m annually for the local economy.

Blue Abyss will appeal to a range of markets by simulating extreme environments in a safe and controlled setting and include the world’s first commercial astronaut training centre. Other markets span offshore energy, maritime defence, ocean ecology, human life sciences and commercial diving, and will help in the further development of remotely operated subsea robots and mini submersibles. 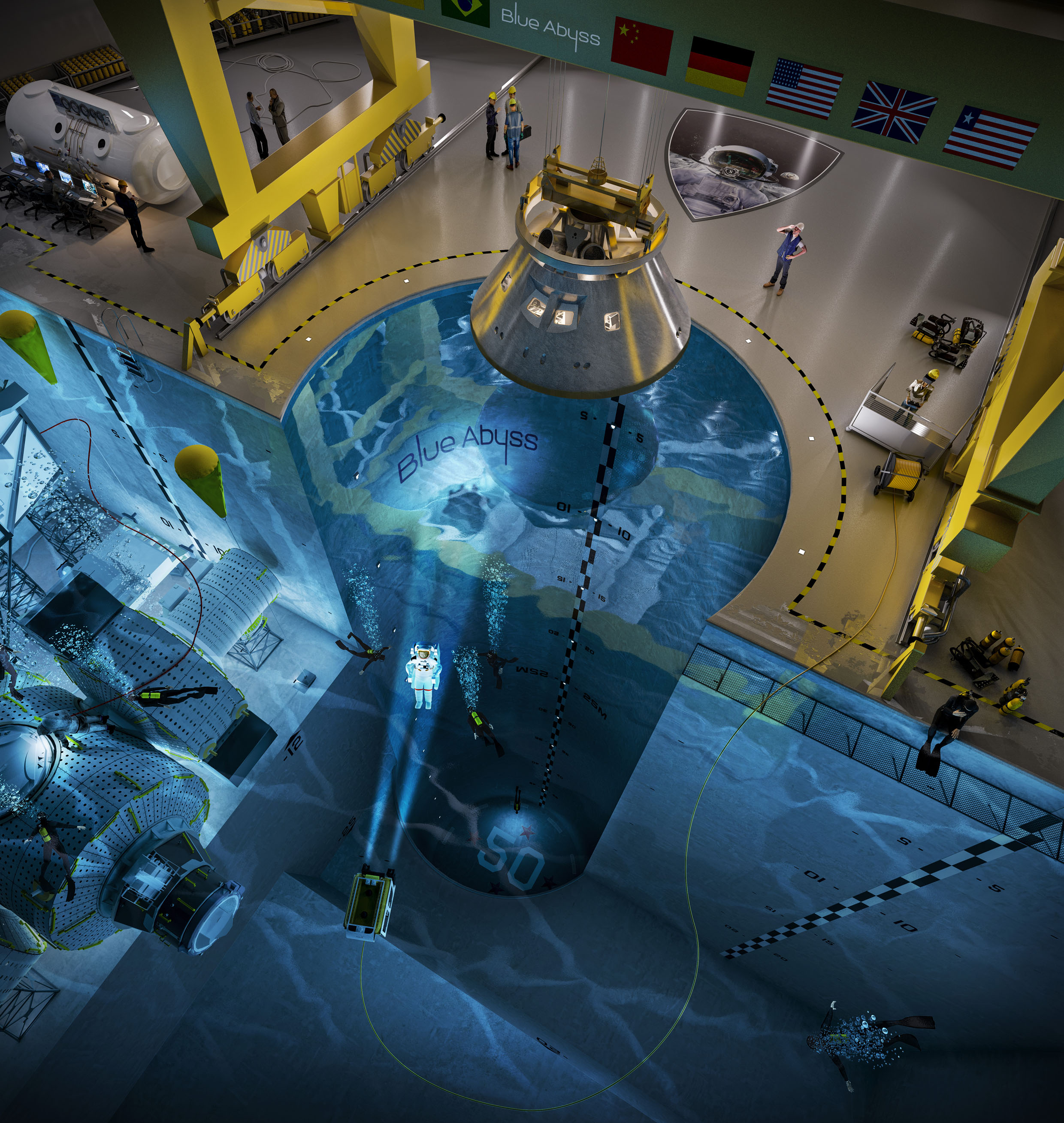 The centrepiece of Blue Abyss is an aquatic centre featuring a 50m by 40m stepped pool with a 50m deep shaft. The pool holds over 42,000 cubic metres of water – the equivalent of 17 Olympic size swimming pools or 168 million cups of tea – making it the largest and deepest indoor pool in the world.

Blue Abyss is the brainchild of ex-forces diving instructor and management consultant, John Vickers and has the support of British astronaut Major Tim Peake, who sits on the Blue Abyss Advisory Board.

I am proud to be part of the Blue Abyss team and I am delighted to see the project take such an important step forward with today’s announcement. Cornwall is the perfect home for Blue Abyss, a region with great potential for its space, aerospace and renewable energy ambitions. This project will join Goonhilly Earth Station and Spaceport Cornwall as significant national assets, creating a deep sea and space research, training and test facility, as well as fantastic educational resource, helping to widen our knowledge of how humans and technology can function in extreme environments, for the benefit of people and the planet.

We’re planning a globally unique facility with a wide range of potential uses that tap into so many of the industries that Cornwall and the South West are known for. Blue Abyss will be a huge research asset for aerospace, offshore energy, underwater robotics, human physiology, defence, leisure and marine industries, and a fantastic education centre for children and university students. Cornwall already feels like our natural home and we’re delighted to have received such a warm response.

Steve Double, MP for St Austell and Newquay, has welcomed the project and said:

Creating world-class research and innovation infrastructure is a priority for the Government. Blue Abyss is a perfect example of the sort of facilities for which the UK should be renowned and I’m delighted the project has chosen Newquay as its home. It will foster many of Cornwall’s emerging industries, creating skilled, well-paid jobs and collaboration across industry, research and education.

And Mark Duddridge, Chair of the Cornwall and Isles of Scilly Local Enterprise Partnership (LEP), said:

Blue Abyss has the potential to become an iconic project for Cornwall and a genuine world-class resource. It fits perfectly with our local industrial strategy to create quality jobs in growth industries like offshore renewable energy and space, and would be an educational and research boost for the whole of the UK at a time when we need to develop new skills for our economy and invest in home-grown research and technology.

Blue Abyss is in negotiation with Cornwall Council to acquire four adjacent plots on the Aerohub Business Park, next to Cornwall Airport Newquay. 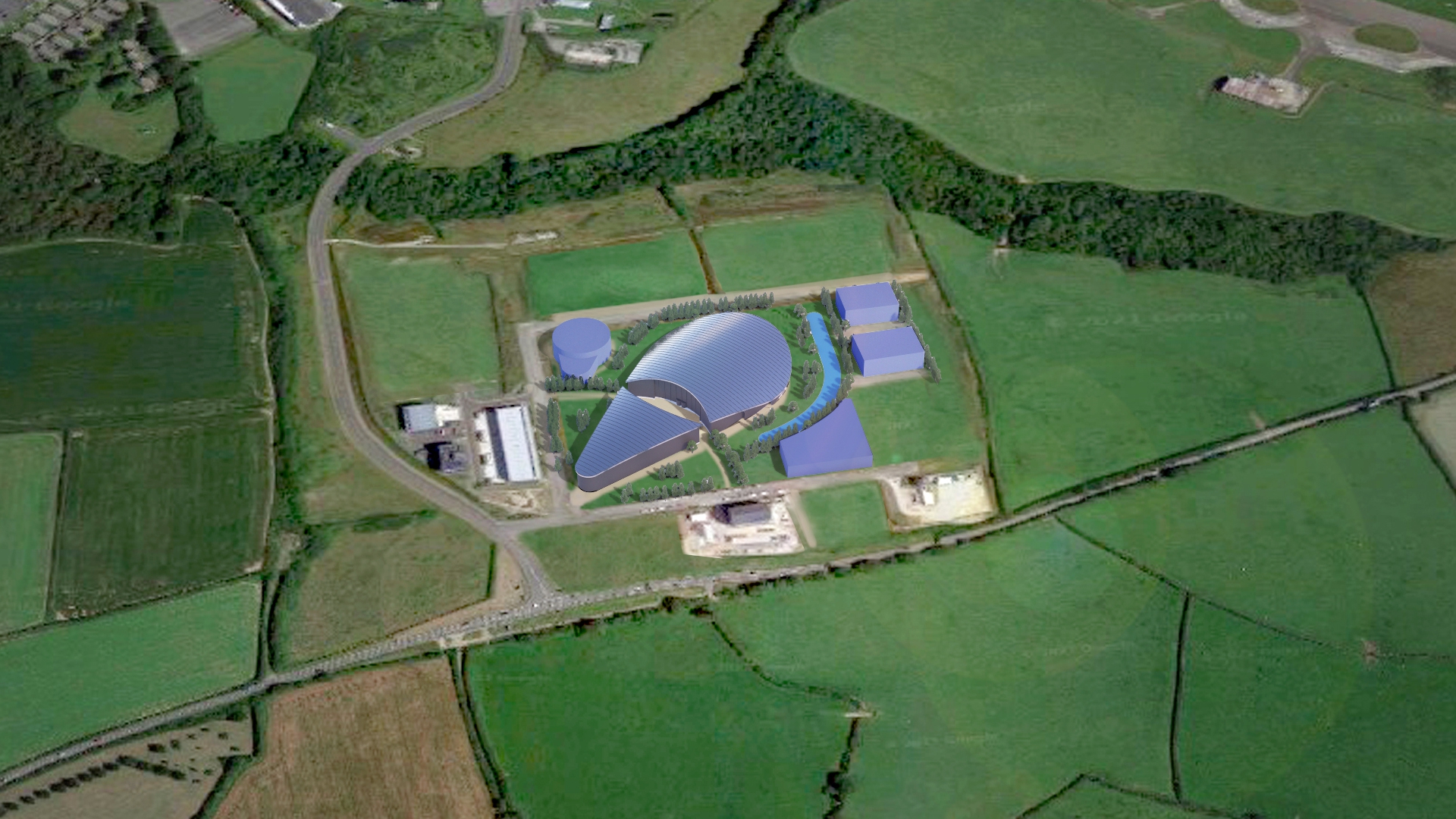 Blue Abyss has been designed by British architect Robin Partington, who led the design team for The Gherkin, one of London’s most striking buildings. Blue Abyss is in the process of applying for planning permission at the Aerohub Enterprise Zone. Construction would take approximately 18 months to complete with a view to being open in 2023.

Blue Abyss has widespread support from industry, academia, and the defence sector:

The ability of Blue Abyss to provide a controlled deep-sea test environment is of great interest to the Royal Navy, who may use the facility as part of their ongoing activities in autonomy and communications. It is also a very attractive proposition for emerging deep-sea projects. As and when it becomes available, Blue Abyss would add a significant enhancement to the Royal Navy’s ability to test and deploy underwater capabilities at unprecedented pace.

Blue Abyss would be a wonderful addition to Cornwall’s growing space economy and complement other activities including horizontal satellite launch at Spaceport Cornwall and our own work with space communications and data here at Goonhilly. By offering astronaut and human spaceflight training in a safe and highly controlled environment Blue Abyss would be an internationally significant facility.

The proposed development of floating wind technology in the Celtic Sea will create a range of new challenges when it comes to installation and inspection of floating wind turbines and their anchor systems, and for their ongoing operations and maintenance. Having a facility like Blue Abyss on the doorstep which can test autonomous inspection vehicles, train professional divers, and provide a venue for helicopter escape and sea survival training, all in a controlled environment would be a huge asset to Cornwall and the UK. This project has a number of synergies with Cornwall’s growth sectors and is perfectly timed.

The breadth of capabilities and facilities that such a centre can offer to the maritime community in the region would have a significant and positive impact on the sector. Being able to accurately monitor, manage and control subsea technology performance in a comprehensive test tank which has underwater currents, changeable lighting and can present obstacles and provocative stimuli to test sensors, will certainly aid the development of innovative marine technology.

Chris Evans, Director of Regional Engagement in the Innovation, Impact and Business Department at the University of Exeter, said:

The University welcomes the location of Blue Abyss in Cornwall because we see great potential and alignment with our research, education, facilities and innovation activities. These span our own Space and Extreme Environments Hub, which brings together research, education and training to prepare humanity to survive and thrive in space and other extreme environments, and our Centre for Ocean Technology with expertise and facilities in offshore wind energy and marine technologies. We envisage a great deal of mutually beneficial activity taking place between the University and Blue Abyss.

It’s exciting that Blue Abyss will accommodate extensive testing and training platforms to support high-quality research and development in the marine and space sectors. We are looking forward to engaging with Blue Abyss to expand and contribute to the opportunities in marine autonomy, marine renewable energy, and digital twins for marine applications, robotics and autonomous systems.

I am delighted to learn that the Blue Abyss extreme environment research and test centre will be located in the west of England. The planned environmental research, test and training facilities for this centre are impressive and will make an exciting contribution to the existing ecosystem of research and development in the region dedicated to the space, marine and defence sectors. The University of Bristol has more than 100 staff engaged in space science and research, and building engagement with Blue Abyss will enable real opportunities for innovation, particularly in the areas of materials and manufacturing for space, digital twins, robotics and autonomous and control systems.

Dive into the Blue Abyss